Looking for an easy yet delicious cookie? Try these chocolate Florentines that can be made even by rookies! 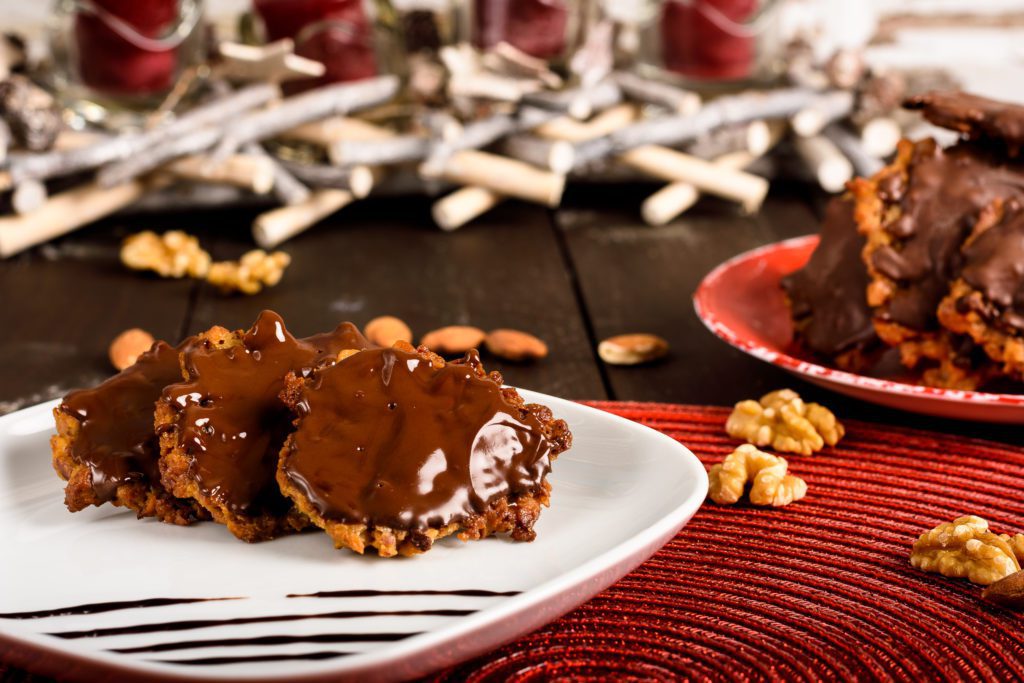 There are recipes that originally good natured and kind, ruined by advance of human greed and tastelessness, AKA pouring sugar in them resulting in sweet but not much else thing.

These recipes are the recipes that have been developed by the unadvanced human race to feed themselves from the available resources with as much fun as possible.

After all, chewing on nuts and berries day after day is not that many of us can bear. So, humans developed various processing techniques that were rather labor intensive due to the lack of electricity and kitchen tools in general.

More precisely, kitchens in general because when kitchens were invented, humans had houses to live in, not just caves where cavemen crushed nuts with sticks and rocks. They also didn’t have dentists who could have fill their cavities before going nuts.

What nuts do to us?

It’s an interesting fact that most healthy food that are rich in nutrients like nuts, legumes, and whole grains also contain phytic acid that blocks the absorption of the majority of those healthy stuff by bonding them before our body could.

Without the crucial nutrients like iron, calcium, magnesium and zinc, our teeth can’t cope with the surrounding world and start to decay unmercifully.

During the centuries, humans have learned how to make inedible food ready to nourish their bodies. This knowledge was passed over generation after generation as cultural tradition with the original purpose of the preparation method faded into oblivion.

What should we do with nuts?

When the same food introduced into new communities without the necessary knowledge of how to prepare it safely, it even caused fatalities.

Most of the time when we prepare food, we aren’t even aware of the reasons why we do it in a way we do it. We don’t need to think very much for such examples if we have ever read about the need of proofing the yeast.

We haven’t read much about soaking nuts in salty water overnight before eating them, though. It seems like we should do that to reduce the pythic acid content. Especially if we are to consume them in large amount, like almond milk or as a flour.

So should we go nuts or not?

But bad it may seem, phytic acid is not such a bad guy ,as it is actually an antioxidant which bonds with the naturally occurring cancer, causing free radicals in our body. The problem is -as with all things arise- when we don’t consume them in moderation.

Human chemistry is such a complicated science intrigued with the never-ending nagging of our brain’s survival instincts and our neo-cortex desire to live healthy and sound life.

Life can be so difficult sometimes. But luckily, there are things that help us through such trying times with ease and joy.

Ease and joy are Florentines all about. Especially these low carb Florentines that are naturally gluten free as there isn’t any flour in them. Although, the original Italian recipe has plenty of sugar in it -as it’s a kind of candied nuts wafer- this keto recipe skips on it and uses prayers to hold everything together.

Instead of the dried high sugar fruits, orange zest was used and the chocolate is just some plain old sugar free baking chocolate. Nothing fancy, nothing difficult but amazingly easy and delicious chocolate orange Florentines. 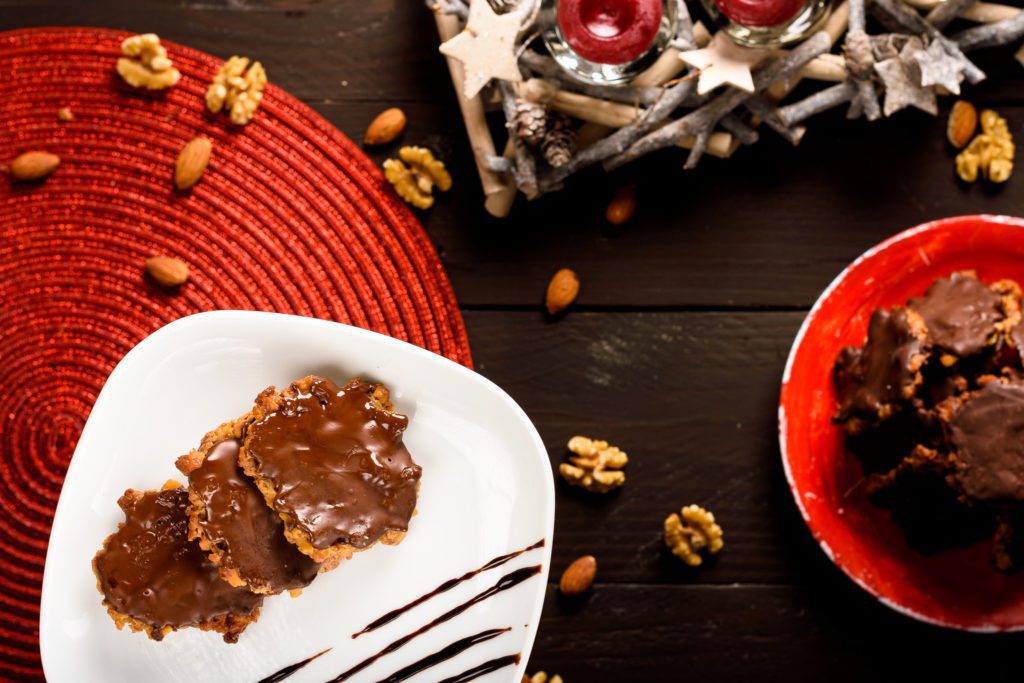 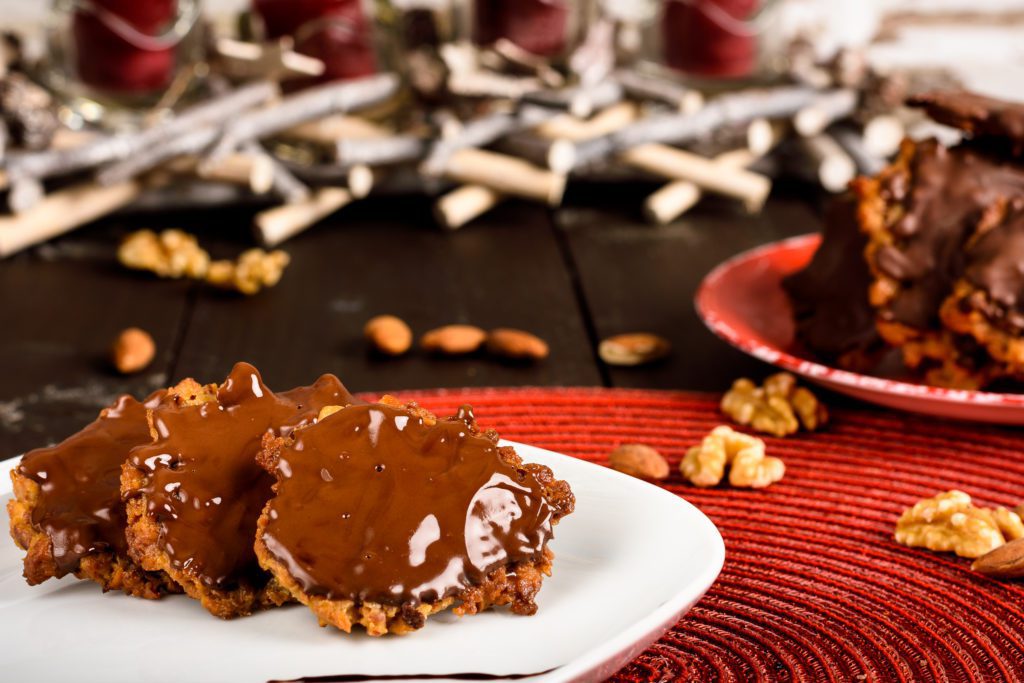 All desserts are equal but some are more equal then the others. The more equal ones are the ones that we use to dress up our heart with while waiting for the special times to come.

It’s a bit complicated. Floarance is a city in Italy but Florentines aren’t really from Florance originally. Catherine de’ Medici who happens to be one of history’s most influential gastronomes who lived in France is from Florence though. Nobody knows why Florentines called Florentines really but rumor has that the french named it after Catherine de’ Medici because that’s what they did with many other food influenced by her.

What are Florentines made of?

Originally Florentines are made of nuts, candied cherries, butter and honey. We can of course add a few extra bits or swap some ingredients with others like we did with adding cream and changing cherries to orange zest. 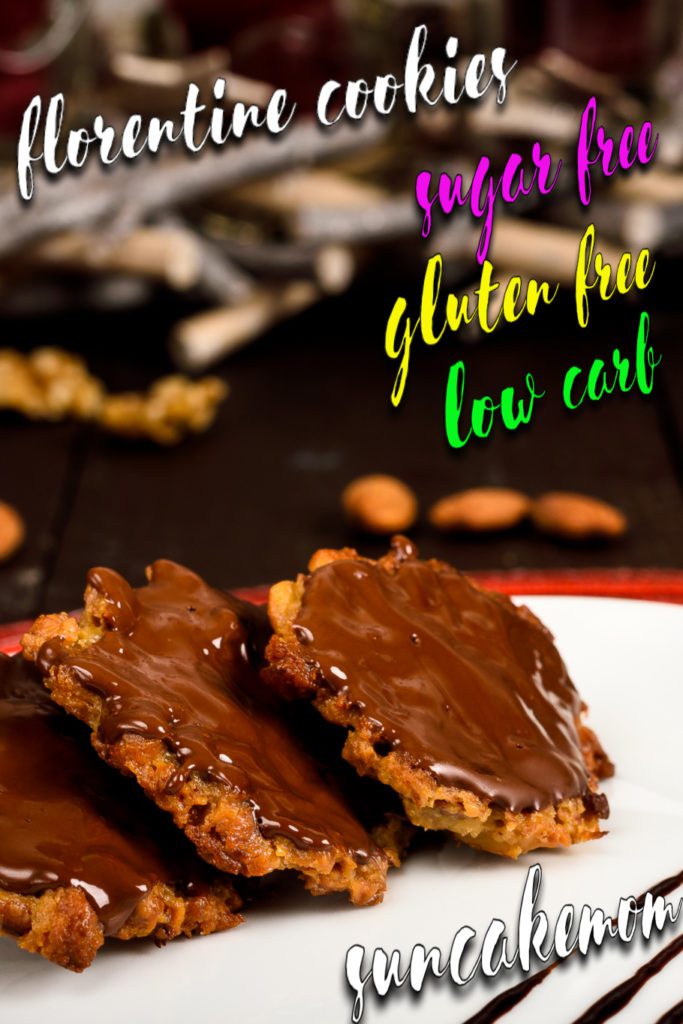