Looking for something unique, something precious that is not meant to be average but a special one? Mount Blanc dessert is even more of that!

It’s interesting to see how the world changes and what we take granted one day it’s gone on the other. This was the history of chestnut in the United States too where a 4 billion strong American chestnut population disappeared almost overnight.Well, it was 40 years to be precise but in evolutionary terms that’s not even a snap. It’s like people getting a flu but, in this case, it was a fungus. Chestnut blight came from the Asian Chestnut trees that were introduced to New York at the beginning of 1900 and spread to the whole of the country.

The only reminder of the once abundant American Chestnut is in old furniture, ships, barns, reclaimed lumber and maybe some old dusty recipes.

This isn’t the first disappearance of the chestnut from the culinary world though. There were times when Chestnuts were main source of food for many people across Europe. In places where cereals couldn’t take roots chestnut flourished beautifully.

Chestnut served as a main carbohydrate source for communities around the Mediterranean breeding countless type methods and recipes to enjoy its virtues. Chestnuts were used to make flour and from that all sort of cakes and bread.

Unfortunately, these recipes were invented before the recipe sharing cult became a trend and few survived through word of mouth because around the 18th century chestnut flour popularity started to wane.

Bakers started to turn their back on the not raising chestnut flour and preferred the gluten rich wheat that was able to produce more complex pastries. People started to see it as a pleasantry isn’t worthy their money and food for only those who can’t afford better.

Chestnut never fully recovered from this blow and never came back, although it may something to do with its price nowadays than looking down on it. As more and more people are looking for alternatives to gluten filled wheat products chestnut is gaining popularity year after year.

And what’s not to like about it, anyway. It’s a naturally sweet fruit. Despite being called nut, it’s full of carbohydrates, contrary to most nuts that are made up of protein and fats. It’s edible raw and responds to all forms of cooking methods.

The only annoying thing about chestnut is their peeling that isn’t particularly easy. But to be honest no nuts give their seed easily.

When buying chestnut fresh, mind to select only the ones that are firm to pressure. Those that have a slight give upon pressing them have lost some of their water already and not recommended to buy. Although, it could be no problem, it could also mean that mold started grow between the seed and the outer layer ruining the whole fruit.

When the cleaning process is done, the chestnut is ready to be part of amazing creations or just simple but fulfilling recipes. The most basic chestnut puree recipe doesn’t make life difficult but calls for pureed chestnut with a bit of rum and an occasional extra sweetener then serve it with whipped cream on top.

Everything goes uphill from there. So uphill that it is called a mountain. Mont Blanc (White Mountain) is a French dessert resembling a snowy mountain hence the name. As it is with mountains, it needs several stages to climb the top peak but luckily this one is quite doable.

The only special equipment we will need is a pastry bag or at least a pastry tip to scale the mountain side and we are ready to conquer this French peak. Failing that we can still descend back to the base and have a plain chestnut puree with cream and cherry on top.

How to make Chestnut puree

All desserts are equal but some are more equal then the others. The more equal ones are the ones that we use to dress up our heart with while waiting for the special times to come. 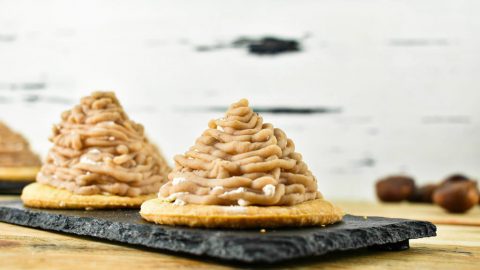 Looking for something unique, something precious that is not meant to be average but a special one? Mount Blanc dessert is even more of that!
Course Dessert
Cuisine French, Sugar free recipe
Prep Time 2 hours
Cook Time 1 hour
Total Time 3 hours
Author SunCakeMom

2 thoughts on “Chestnut Puree Recipe and The Mount Blanc Dessert”