A tasty snack that’s easy to make and everyone likes? Check out this Latkes recipe that will make everyone happy once in a while! 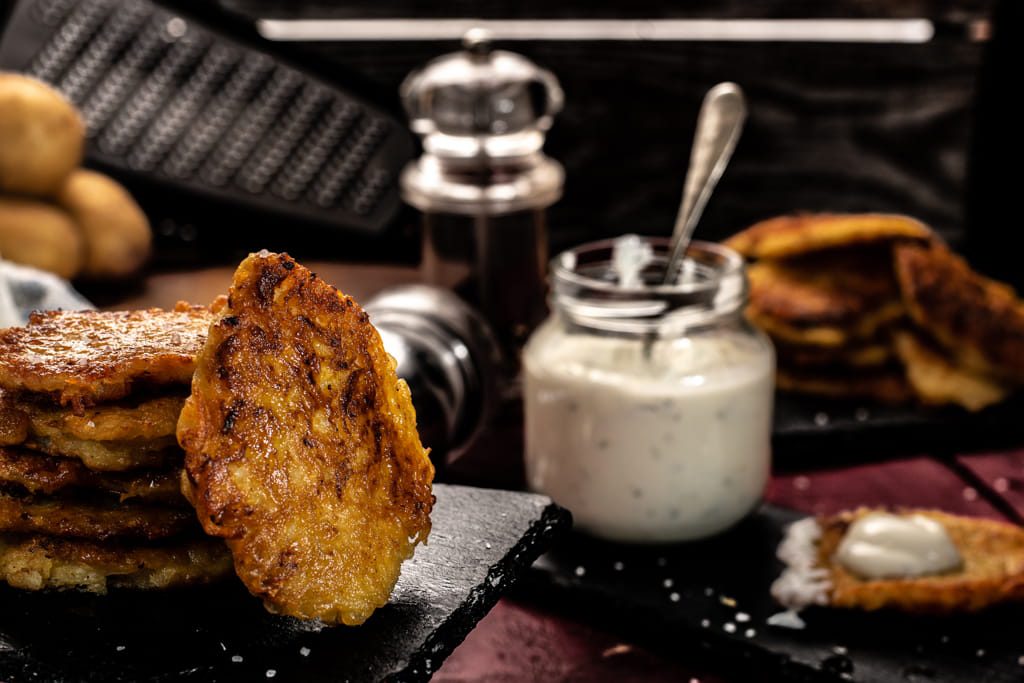 Latkes are a type of pancakes dominantly made with grated potatoes mixed with some sort of binding agents like flour and eggs.

Of course, it wasn’t always like that, and latkes were made from other vegetables, cheese or legumes but since the potato arrival to the shores of the Old Continent, it quickly gained popularity in many recipes including Latke.

Nowadays, latkes are almost synonymous with potatoes, apart from minor divergencies where people still like making other variations, such as zucchini or cauliflower latkes, aka zucchini fritters and cauliflower hash browns.

Potato latkes are divided into two major groups where the dough is made up with grated potatoes while the other uses puréed potatoes as its base. Once the main flow is determined, we can further narrow down on the ingredients, making purely vegan latkes, substituting the eggs or skipping them entirely.

Latkes have been strongly influenced by Jewish culinary customs over the centuries. Its most traditional form, it should be made using potatoes, onion, matzo meal (a type of breadcrumbs) and eggs then fried in chicken fat.

Of course, if we aren’t subject to dietary laws, we can freely deviate from the base, using vegetable oil as well as swapping matzo meal with breadcrumbs or plain white flour. Sure, there will be a difference in texture and flavor with each change of ingredients but since there isn’t latkes governing body in the world yet, we are free to roam in the land of fried starches as much as we like.

Traditional condiments of latkes are sour cream and/or apple sauce which are perfect companions to many fried goodies, but if we want to take things a notch higher, adding spices and herbs, making ranch dressing, French onion dip or tzatziki sauce will condense all the difference in the world into our spoons.

Making latkes takes little time and effort, given that we have a double-edged shredder, and we aren’t afraid to use it. The most tearful part of the job is wringing out the liquid from the potatoes and shredded onions but not because it’s that hard but rather the smell of onion will make us cry.

The width of latkes is also up to personal preference and can be made from thin to rather fat without risking our latkes lose their certification of authenticity. It’s worth to note though, the frying times will increase with the width of our patties.

For those who like to heat up their skillet to oil smoking hot, a word of caution, don’t do it. The potatoes in latkes, although shredded finely, need time to cook through so start with a medium low or low heat and increase the heat only if needed.

Ideally latkes need about 1 – 3 minutes per side to get golden brown and the potatoes to be cooked through. Sure if we use mashed potatoes as the base, there is no danger of chewing on raw tuber pieces of the potentially toxic nightshade family.

Latkes can be kept in the fridge for about a week without a problem or in the freezer for longer times but it’s best when still warm and crunchy, right next from the frying pan.

Thanks to the saturated fat content of the frying oil, latkes aren’t the healthiest conscious choice in our repertoire nor the lowest in calories. If we don’t start our morning with fried bread or churros though and plan to finish it with crepes, we can get away with a couple of latkes every now and then. 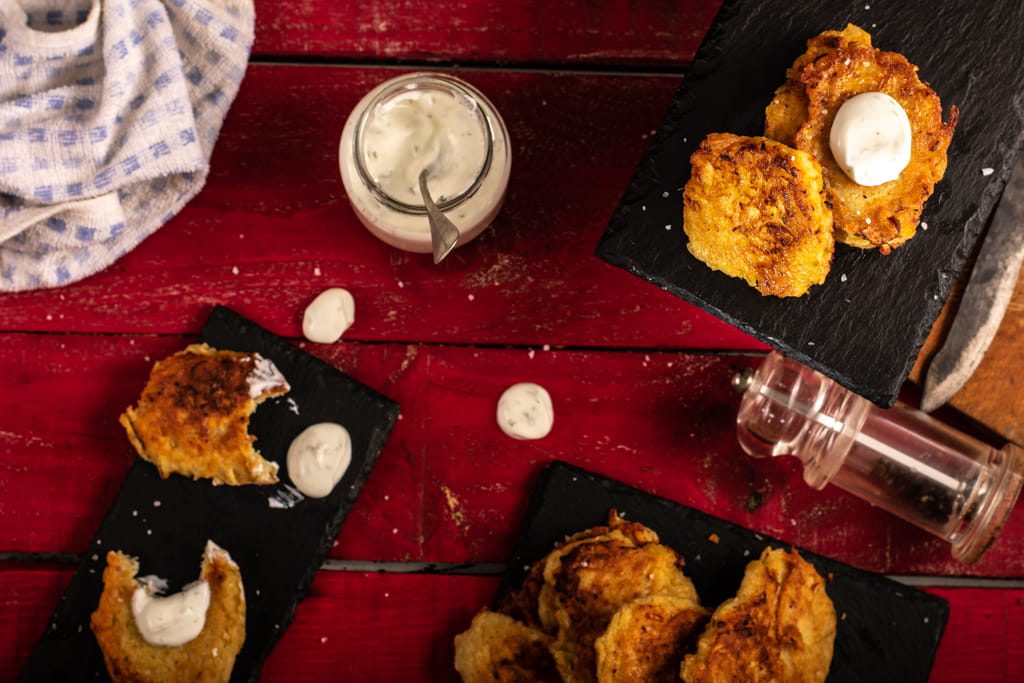 How to make Latkes 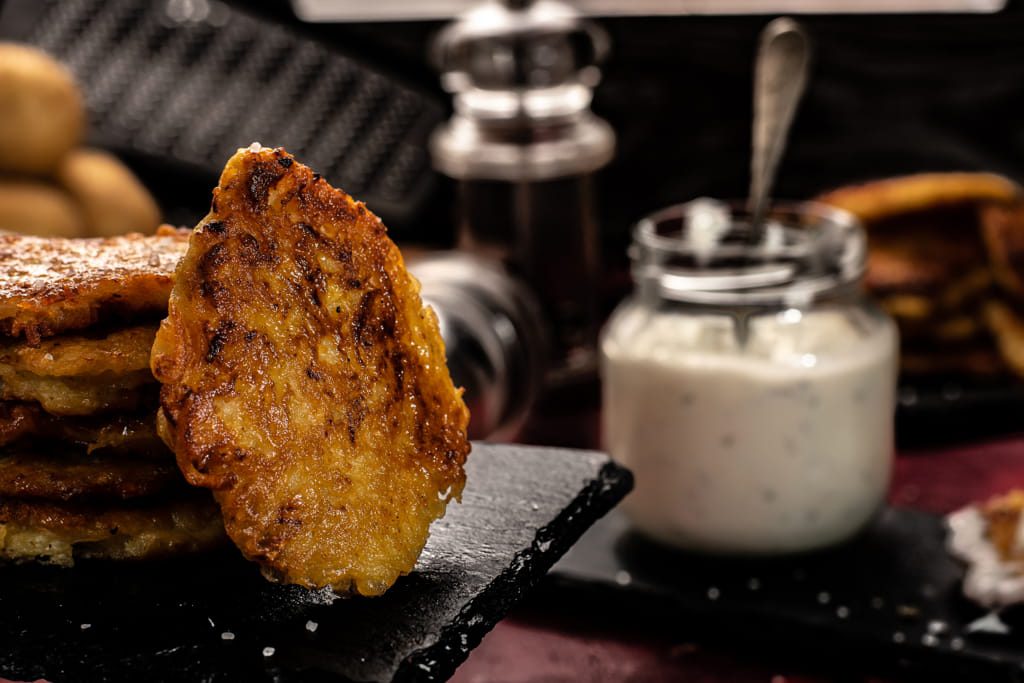 What are latkes made of?

Although there are variations, nowadays latkes are synonymous with potato and some added starch such as matzo meal, breadcrumbs or plain flour bind together with eggs.

What’s the difference between potato pancakes and latkes?

There is no difference between potato pancakes and latkes as there is no clear definition what either of them should be made of. Latkes can diverge from potatoes and use other vegetables but potato pancakes obviously can’t use anything else but potatoes.

What ethnicity is latkes?

Latkes have Jewish origin and they are eaten since the 14th century. Back then it was made with cheese and other vegetables but once potato was introduced to Europe, it quickly became the dominant ingredient in the patties. 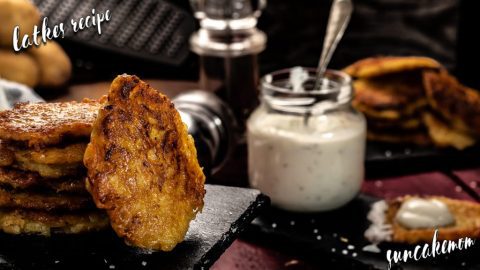 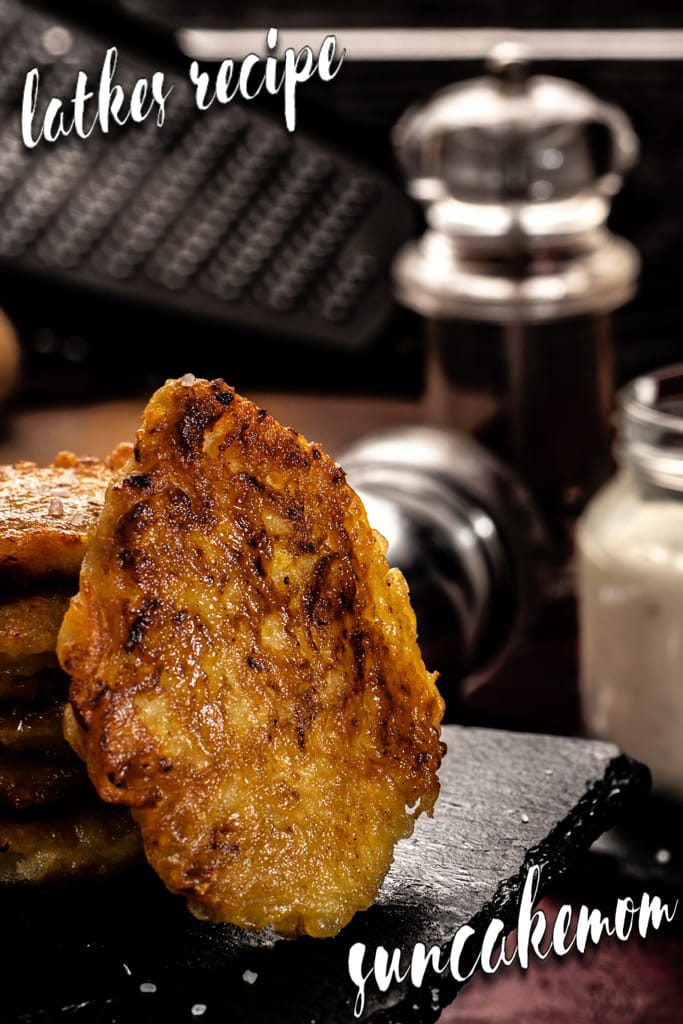