A quick bite or something that lingers on the mind? Check out this Cuban sandwich recipe that makes life a worthwhile! 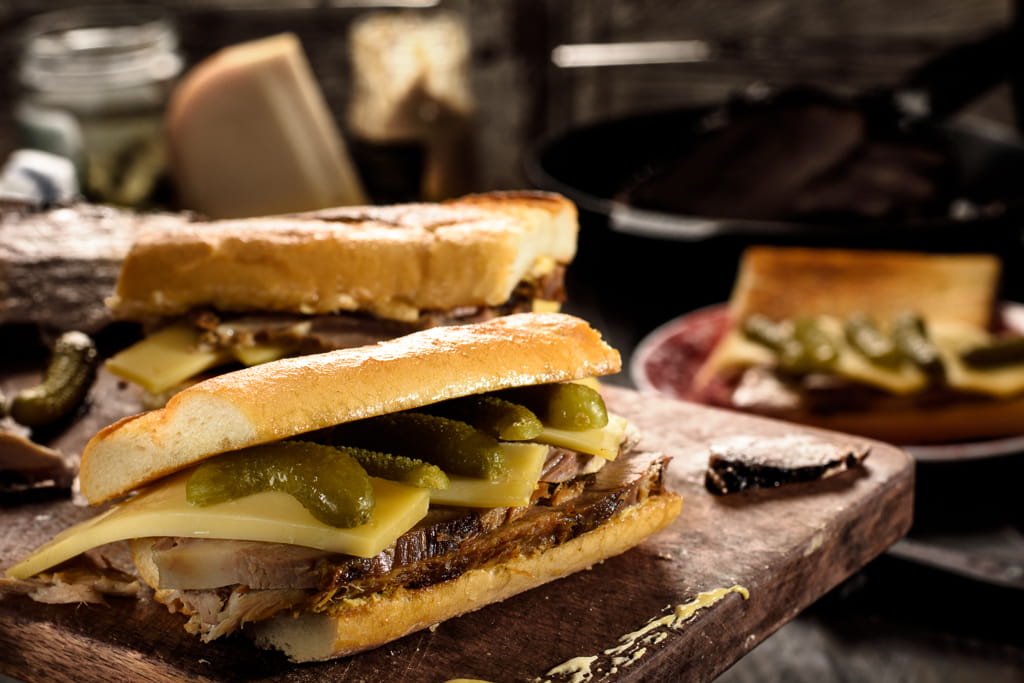 Although the Cubano is a fairly recent invention that’s barely passed a century due to the lackluster documentation practices in the culinary industry and the nonexistence of social media, we know little  about its true origin.

Most likely it sailed to the shores of Tampa in some form and through the influence of the vibrant immigrant community there it flourished. Due to the active movements of workers, it soon moved onto other parts of Florida too choosing Miami as another hot spot for its residence.

The rivalry between Tampa and Miami about who has the best Cubano is still raging and so is to decide what should and shouldn’t be in a proper Cubano sandwich.

The Cubano sandwich  in its most basic form, where it is still considered a Cubano and not something else, is made with toasted Cubano bread, pulled pork, Swiss cheese, pickles, and mustard. Although the type of bread is important part of the sandwich, if we look into the history of Cuban bread and the fact the it was made in the “La Joven Francesa” which means “The young French girl” if need presses, we may skip the trip to our nearest Cuban bread supplier and resort to use French baguettes every now and again without shame.

If we want to go into the nitty gritty of bread making then the actual difference between the French baguette and Cubanos lie in the extra lard added to Cubanos. The extra fat gives them their signature almost paper-thin crust and soft flaky center which both goes unenjoyable the day past their baking thanks to the lack of preservatives for which we should be thankful.

If we can get over the bred crisis there are some ingredients that considered part of a Cuban sandwich by some, while it would mean something similar to “pineapple on a pizza” for others.

Although it may seem like sneaking Genoa salami into Cuban sandwiches as a way of revenge for forcing pineapple onto pizzas the two incidents aren’t related nor in time or space. Many variations of Cuban sandwich include some sort of ham as an addition to the pork meat and where Italians bought the sandwiches that happened to be their favorite.

Although plans for Vegan or even Vegetarian Cubanos have not been drawn yet, there are attempts to cater for a more health-conscious consumers too. In some places lettuce and tomato is also added to increase the number of layers which could really liven up the fat and protein laid heaviness of the sandwich even if it is largely rejected by purists.

Luckily the pickles and the mustard haven’t fallen under such scrutiny just yet so we can go with our favorite or the one that hasn’t got sugar as both tend to be ruined by unnecessary sweeteners.

Nor there is much talk about the importance of choosing between butter or olive oil when toasting the bread. While both considered cannon when making a Cubano, they will steer our sandwich to almost opposite direction when developing its flavor.

While butter gives a nutty vibe, olive oil depending on its strength gives its unique crunchy tanginess to every bite. Both variation is sought after by many, and one is not considered superior over the other but rather a choice depending on our mood.

The making of Cuban sandwich can be a very quick affair thrown together by leftovers from our fridge ready to be shoveled down in moment’s notice at lunch time. However, if we like to take things up a notch or two, we can spend hours shaping the flavors, creating an experience that begins from the first dip of the pork into mojo to the last bite that leaves a longing stare in our mind for more. 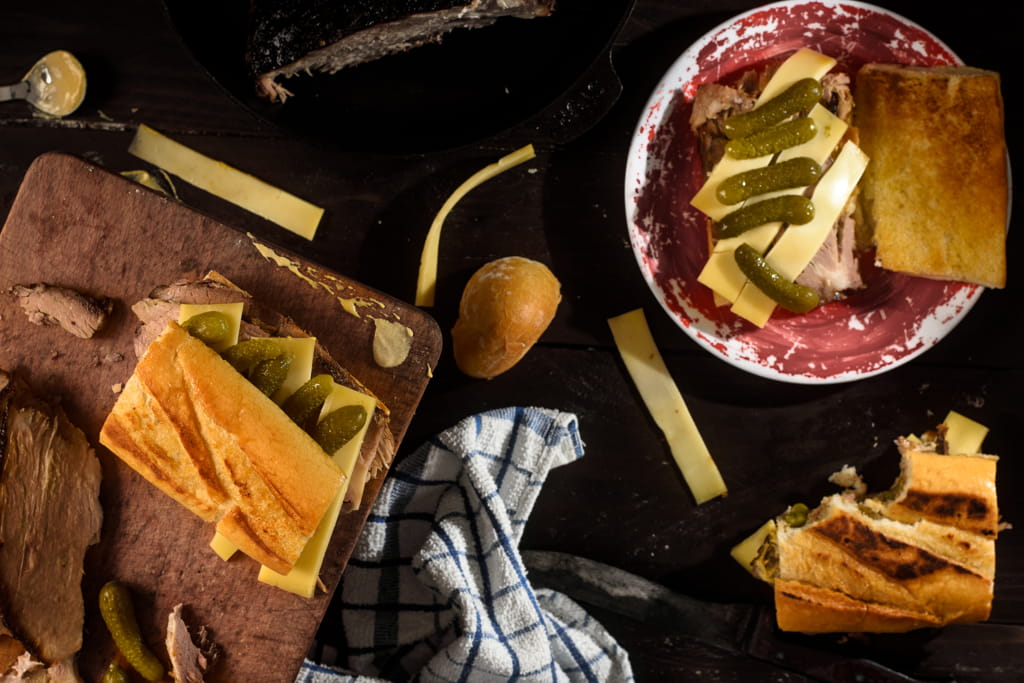 How to make Cuban sandwich 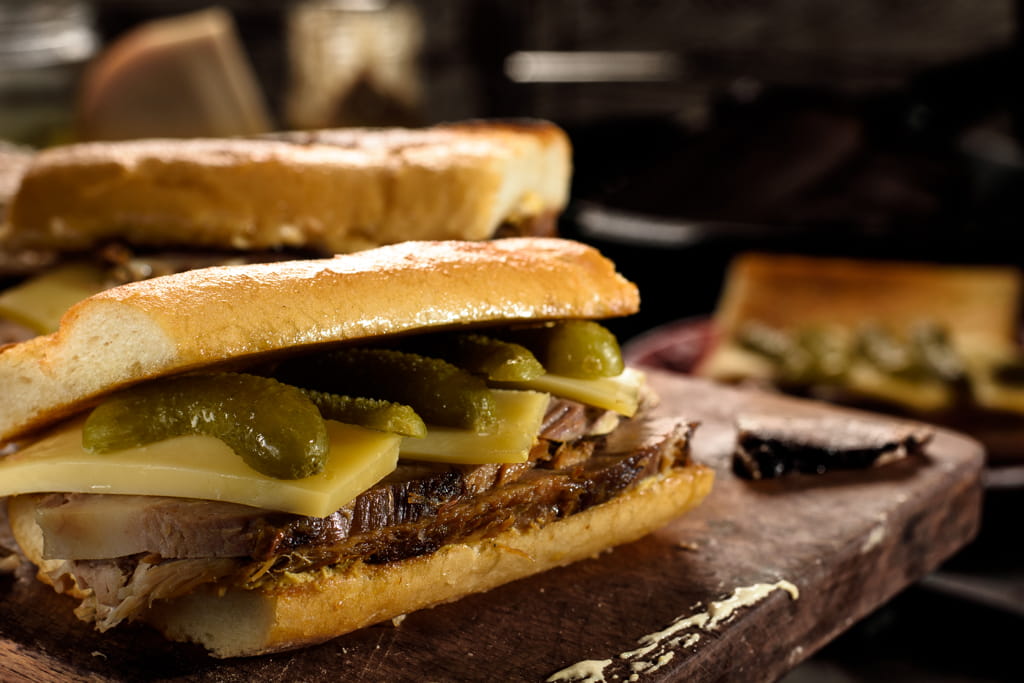 What is a Cuban sandwich made of?

Cuban sandwich is made of cuban bread, marinated roast pork, mustard, cheese and pickles. Optionally slaices of ham, salami or toamto and lettuce are also included.

What makes a Cuban sandwich different?

Some say it’s the Cuban bread others say it’s the cuban roast meat. The combination of the two with the added pickles, cheese and mustard what makes the Cubano stand on its own.

Is a Cuban sandwich the same as a Cubano?

Yes, Cuban sandwich, Cuban mix or mixto is the same as Cubano.

What makes a Cuban sandwich special?

The butter or olive oil toasted bread and the marinated slow roast pork shoulder makes all the difference in Cuban sandwich. Complate that with pickles, mustard and cheese and there we have a truly unique profile of flavors. 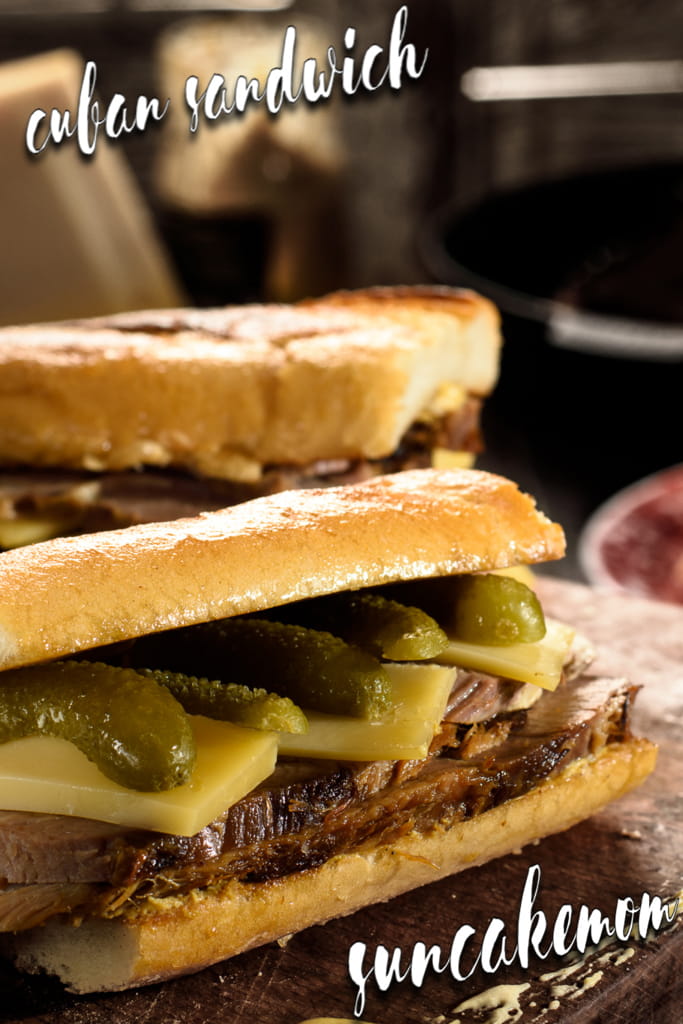