Seeking joy and happiness but not in the mood of making dessert? Bake these chicken wings to make a perfect snack on any day! 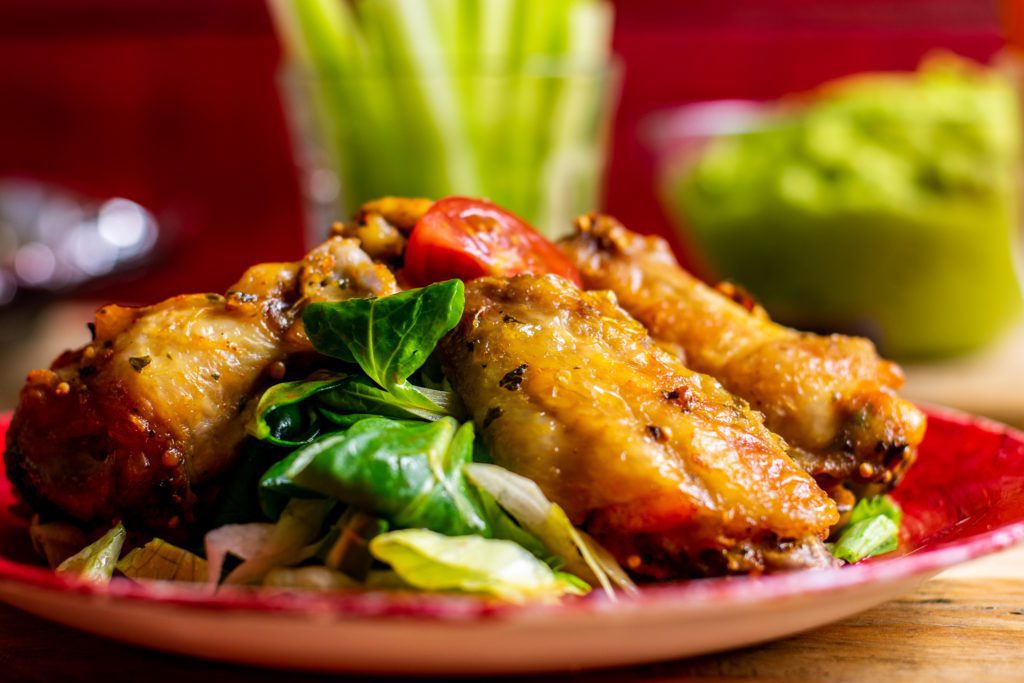 Cooking food that has a solid structure — like any type of meat or vegetables — no matter the temperature of the oven, it’s called roasting. With that out of the way lets dive into how to prepare chicken breast using the dry heat of the oven.

Chicken wings weren’t always in a prominent status as they are today. There were times when this delicacy was frowned upon and was thrown out to feed the dogs and cats.

It’s not the first time that the human race walks in darkness and blesses the ignorance. It’s coded into our very nature to not open ourselves up for unknown things and stay within our boundaries.

Luckily there are always some who feel more adventurous and eventually curiosity draws us into the light, even if it takes hundreds of years.

The renaissances of chicken wings came in the 60’s. Not as some haven’t tried chicken wings before in the secrecy of the family kitchen but selling them in bars or restaurants would have been like cursing God’s name in the Middle Ages.

Luckily the Spanish inquisition was long gone when the anchor restaurant in Buffalo, run out of their options and threw chicken wings into the hot oil.

As with everything in history, nothing happens overnight nor was the news of the buffalo wings caught fire and spread like wildfire all over the country the next night. In fact, people who were present, didn’t even realize that they were part of a revolution bite after bite.

A couple of years later in 1977, the July 29th was declared as Chicken Wings Day, thus its conquest began. At the end of the 80’s, it was all over the bars across the U.S. but it reached a completely new level when McDonald’s started selling them at the beginning of the 90’s.

Since then, it reached almost as high level of appreciation as the chicken feet in China. So far chicken wings were not required to be imported from all over the world to feed the population, as China does with the feet but national wing shortages are a thing every now and then.

Probably, it would help to reduce the emergency situation if there were less chicken wing eating competitions all around the country but who would want to chicken out of that fun?

Chicken wings can’t only be fried in hot, almost burning oil though. They can be made in nowadays popular air fryers or in the old school ways of baking them in the oven.

Roasted chicken wings are as delicious as the fried ones with the only drawback that it takes longer to prepare them. In turn, we won’t get oil smell and splatters all over the place. Frying a batch of chicken wings generally takes about 10 minutes with constant vigilance while in the oven it spends around 40 to 60 minutes without much bother and oil.

So, roasting chicken wings is basically healthier and less hassle than frying them. In case of making a big batch, it could even be quicker as well but let’s not get into math too much in the kitchen.

Preparation doesn’t differ much from the frying either, except we can use many spices to rub the wings before placing them on the oven tray. In the oven, there isn’t anything that could wash the flavors off the surface of the food thus we don’t necessarily have to bother to dip the wings in a spicy sauce afterwards as we can do everything before and just bake them ready to eat. 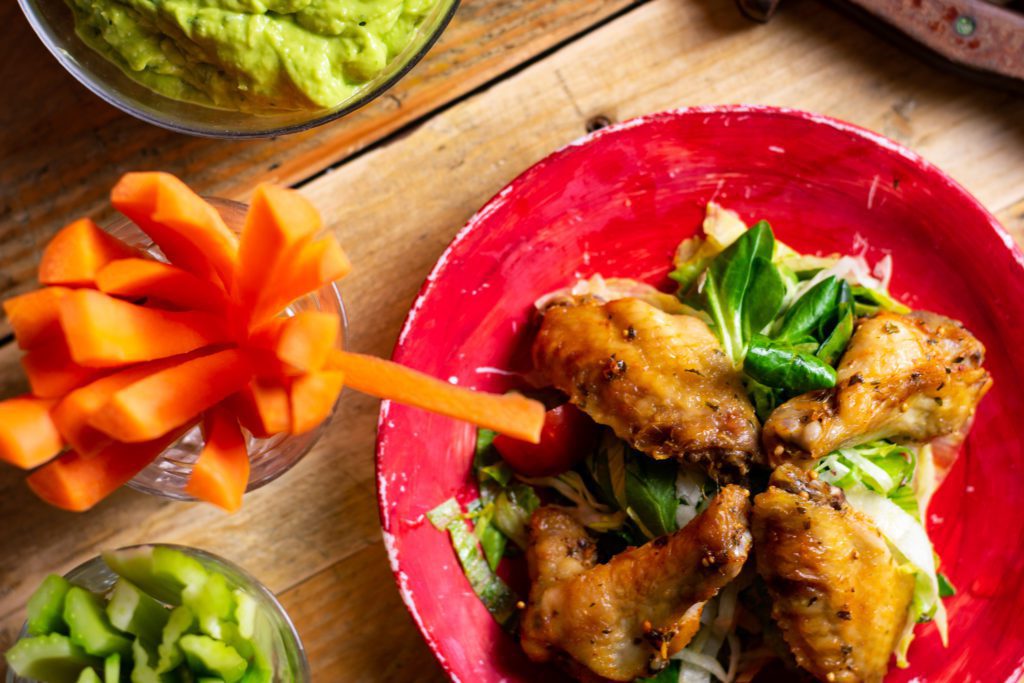 How to make Baked chicken wings 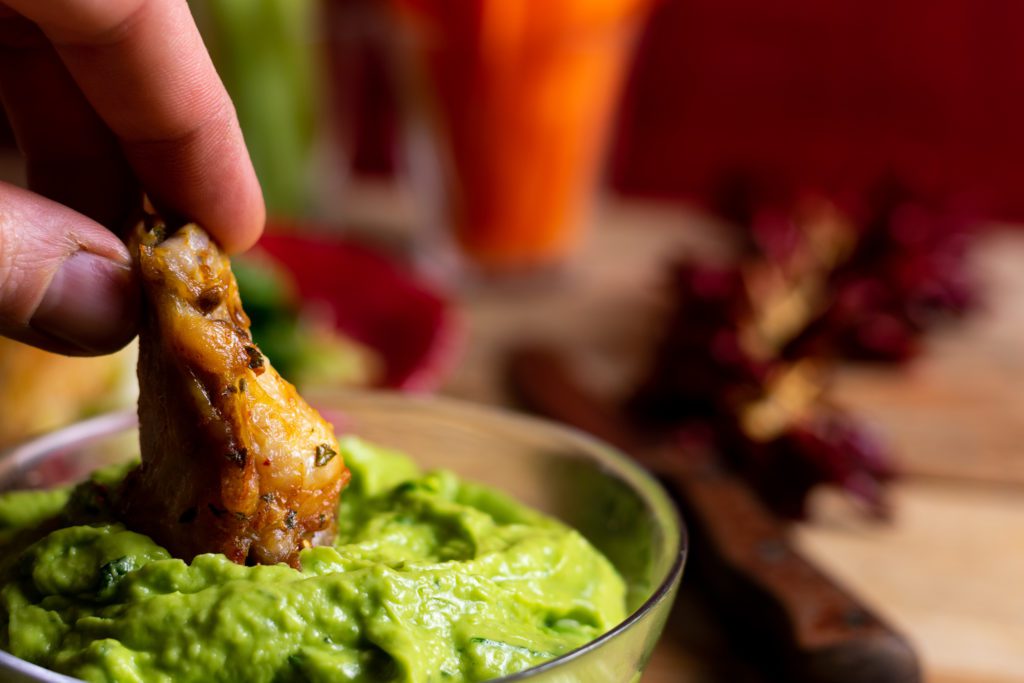 Note: Baking is a cooking method that changes the food structure from liquid to solid. Where this structural change is not happening -like it is the case with meats and vegetables including chicken breast- the process is not called baking but roasting.

At what temperature are chicken wings done?

Do we need to flip chicken wings when baking?

No, we don’t need to flip them but it will taste better if we do.

Chicken is protein and protein is needed for building muscles. There is nothing wrong with baking so baked chicken wings are one of the healthiest food there is.

How long does chicken take to bake at 400? 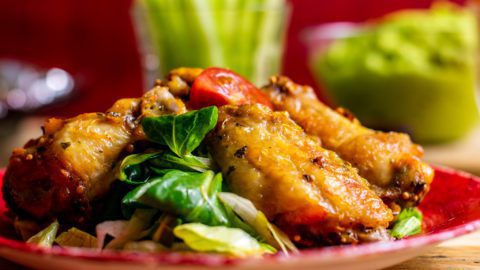