A sauce to build upon or something to spot on? Check out this Béchamel sauce recipe that will open the door for a world of joy! 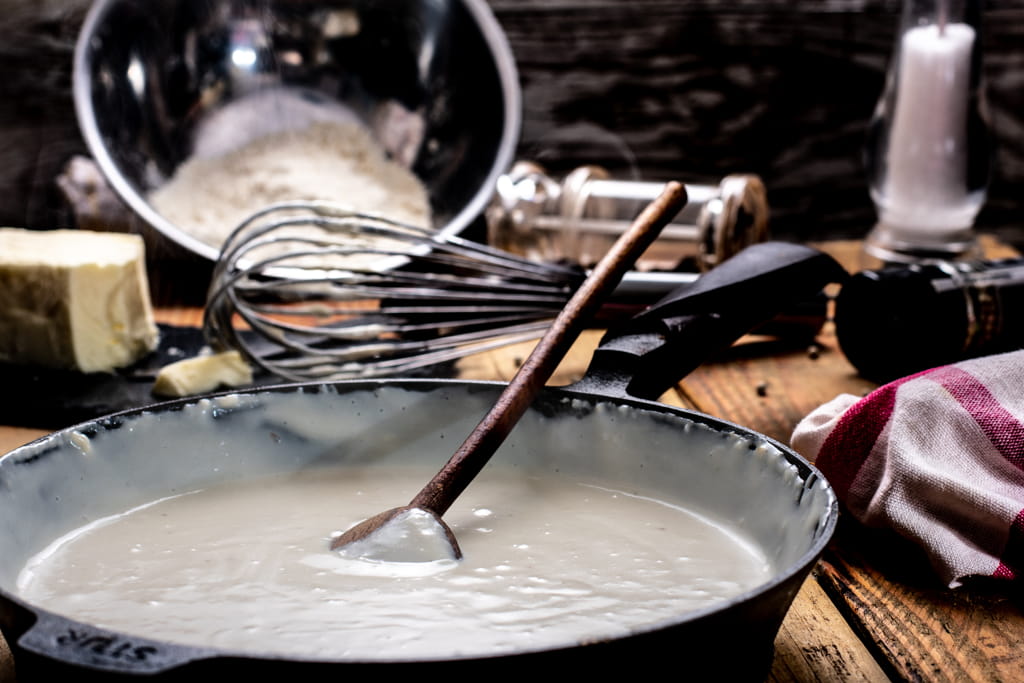 Having a white canvas sounds like an excellent opportunity for new unrestricted ideas to spread on. It implies freedom and endless possibilities, but it seems like the inexhaustible limits reach only as far as the imagination of the one using the brush.

Apparently, our limiters in the form of biases are put on us, even before we could put them into words. Studies conducted that in early childhood, kids as young as 6 months old are showing clear preference towards what constitutes a beautiful skin color despite, they didn’t have one.

They weren’t taught or even encouraged to behave in such way by their parents or teachers, but they simply picked up cues from their environment and mirrored them in their selection.

We are pretty good at copying the behavior of our fellow human beings because similar behavior, ideas or even as blatant as clothes (hence uniforms) provide a sense of belonging to the same tribe and creates trust among its members.

We are fine tuned for reading body language and the forty-two individual muscles on the human face and on the subconscious level trying to work out if the newly acquainted person will be a friend or foe. If we detect dissonance between the words of someone and the body language, they subconsciously convey or even worse, true hostility, we will hesitate to put our trust in them and leave the conversation with a bad gut feeling.

On the contrary, we’ll be happy to jog along any idea that someone who gained our trust proposes, even though the only difference between the ideas is that our subconscious was convinced the reliability of the source.

So before letting our imagination on a joyride with its rainbow-colored unicorn, first we need to find the shackles are put on us by our own evolutionary body. The question, if we can release ourselves from them, is still up in the air as prejudices, biases are the same as habits learnt once and stored indefinitely then acted upon unconsciously when needed.

The most we can do is being aware of them and trying to compensate for our prejudices and biases but how we can counterbalance something that underpins the whole of our existence and feels so bad for doing so. It’s like swapping black pepper for nutmeg in Béchamel sauce when after a lifetime we accidentally learn that it only should contain salt and nutmeg as a seasoning base.

Béchamel or white sauce or white gravy is one of the five mother sauces of French cuisine. It’s made from white roux which is equal part of flour and butter mixture by weight and milk.

There are many legends about the origin of the Béchamel sauce spanning back centuries but the first recipe similar to modern Béchamel just a couple of hundred years old.

The name of the sauce was given in honor of Louis de Béchamel who served as the chief steward of King Louis XIV of France in the 17th century.

The first recipe using the name Béchamel, although similar to the fairly simple modern variety, is different in allowing more ingredients and variations of spices and herbs.

Modern Béchamel uses only butter, flour and milk as the base sauce flavored with salt and occasionally nutmeg as a seasoning base.

Being a mother sauce means being a white canvas for ideas to be spread on. Béchamel is used in a wide variety of dishes with various additional ingredients to complement the final dining experience.

Some of the additions earn the right to have their own name like Mornay sauce that is also known in less culinary savvy circles as cheese sauce and used in many dishes like the Greek Pastitsio, Mac n’ cheese or Moussaka just to name a few.

Once we make our white sauce canvas, the ingredients are limitless to put on, but the question is if we can really take the reins off to enjoy the ride.

How to make Béchamel sauce 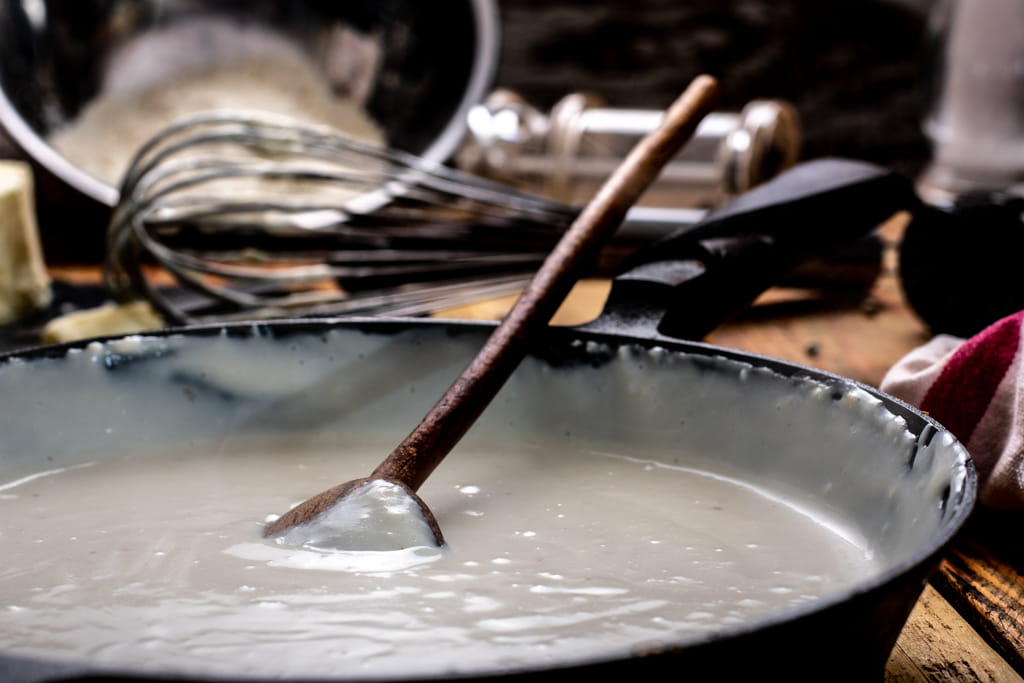 Béchamel is a great start but why to stop there?

What is the difference between Béchamel and white sauce?

Nothing. Béchamel sauce and white sauce are one and the same, only there are some people who know how white sauce is referred to in culinary circles.

The base spices for Béchamel are salt and nutmeg and this is exactly how Béchamel tastes like. Salty nutmeg on a creamy bed. Of course, if we use black pepper and salt then it will taste like that.

Is lasagna sauce the same as Béchamel?

No, lasagna sauce, if there is such thing, is made with tomato and ground meat. The whitish thing in lasagna is supposed to be cheese. 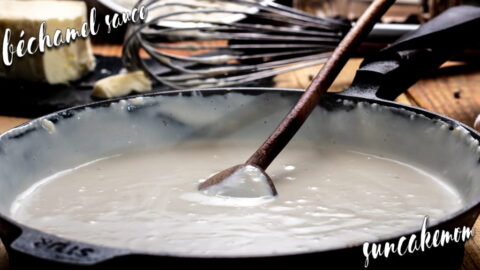 A sauce to build upon or something to spot on? Check out this Béchamel sauce recipe that will open the door for a world of joy!
Course Condiments
Cuisine French, Sugar free recipe
Prep Time 5 minutes
Cook Time 5 minutes
Servings 10
Calories 139kcal
Author SunCakeMom 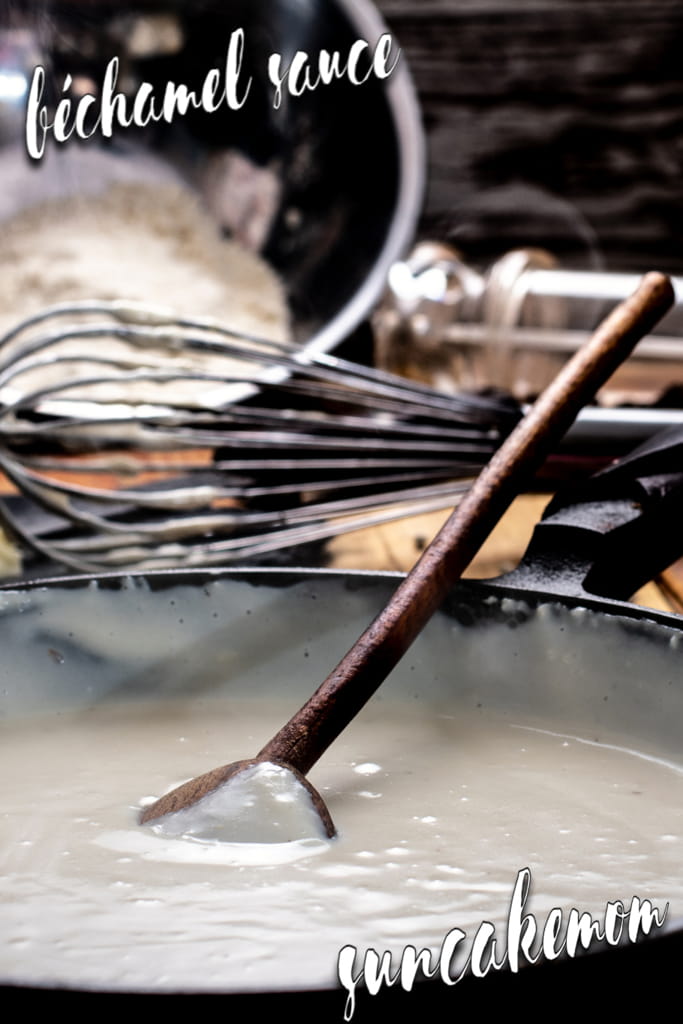