Excellent sauce that came a long way from its humble oil and garlic beginnings. Aioli sauce is a condiment that proves itself not only for garlic lovers. 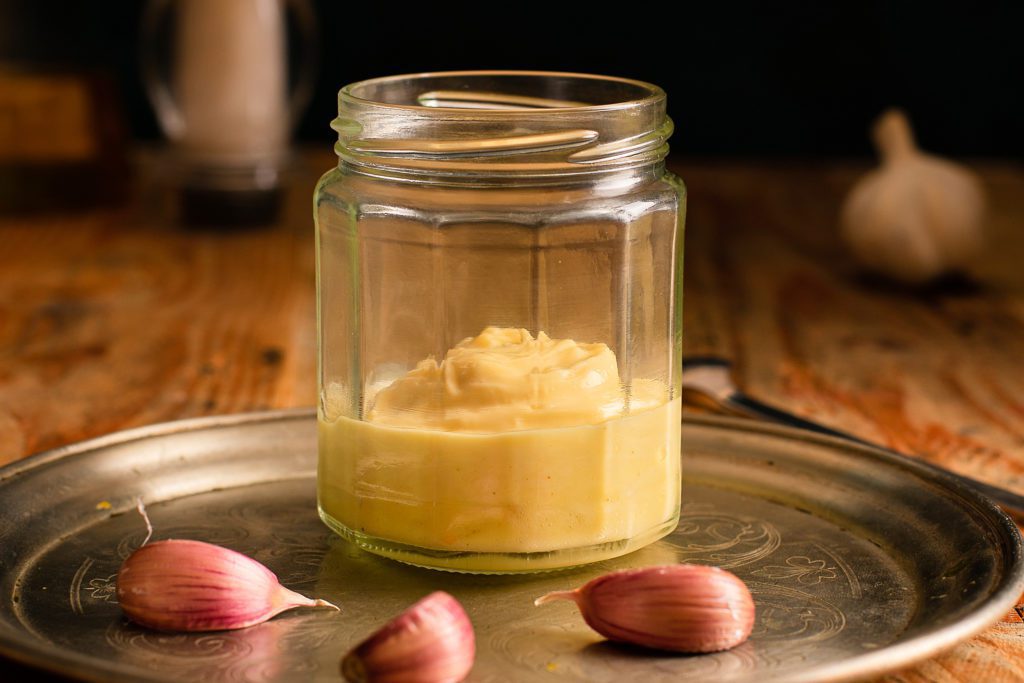 Aioli in its purest or traditional form is nothing else but garlic and oil forced together in a mortar by the contours pounding of the pestle. It’s a kitchen task quite on the laborious side that results in a strong yet tasty garlic sauce.

Since the golden 80’s when so many wonderous things came to age like the synthesizers, Michael Jackson or the Viennetta ice-cream Aioli stole some of the spotlight as well.

Aioli emerged from its native Mediterranean home into the international culinary podium to be tested and measured by the always hungry audience.

Soon the humble barefooted garlic sauce found itself guided through in the swirl of fame by the more experienced ingredients. It is how paprika, saffron or chili were added to it but not before it was dressed up properly by mayonnaise.

Mayonnaise and original aioli sauce are the same in terms of techniques they are made of. Both are emulsified which means oil is crushed into so small of a droplet, we tend to think it is mixed up with the other liquid present in the dish.

Over the years in the starlight Aioli got known though as garlicky mayonnaise, thanks to the fairly bland flavor of mayo that can take up almost any flavor.

Throwing a handful of garlic into a cup of always available mayonnaise gave us the sauce we desired without the additional thumping of the pestle on the nerves of our family or friends.

During the decades though, it seems that the throwing itself became aioli as nowadays anything can be called aioli sauce if it’s mayo mixed with something, even if it has no garlic in it at all.

This is how things change in culinary in so short of a time when recipes are released into the wild without rock solid backup, they can rely on when things got out of hand. It’s not an accident that nations with proud gastronomical ancestry get their most sacred recipes registered.

It would be relatively hard to protect the Aioli sauce identity as so many nations are claiming it to be their own as many are living around the Mediterranean Sea.

We can use Aioli as a sauce for most meat dishes without thinking twice but it’s a perfect choice for dipping tortilla or some sort of fried potatoes in it too. It’s not uncommon to serve the famous patatas bravas soaked partially with this garlicky white sauce.

The best thing with this recipe is that we don’t have to try to substitute the added sugar with something else or get familiar with the sweetless taste because the aioli is a naturally sugar free sauce.

Traditionally, the sauce is made in a mortar with a pestle but if we are able to bear the belittling glances of the conservative Aioli purists, we can grab an immersion blender and shamelessly whirl the garlic around until it gets thick enough.

Most of the time though, specially if not the whole family is into garlic, it’s much more worth investing our time in making mayonnaise first. If we have a nice big jar of mayo, it’s easy to spoon out some into a separate bowl and mix in a handful of garlic for the Aioli.

Surprisingly, when garlic blended into mayo the harshness of its character smoothens out and leaves us with the essence of the flavor without loosing its value. 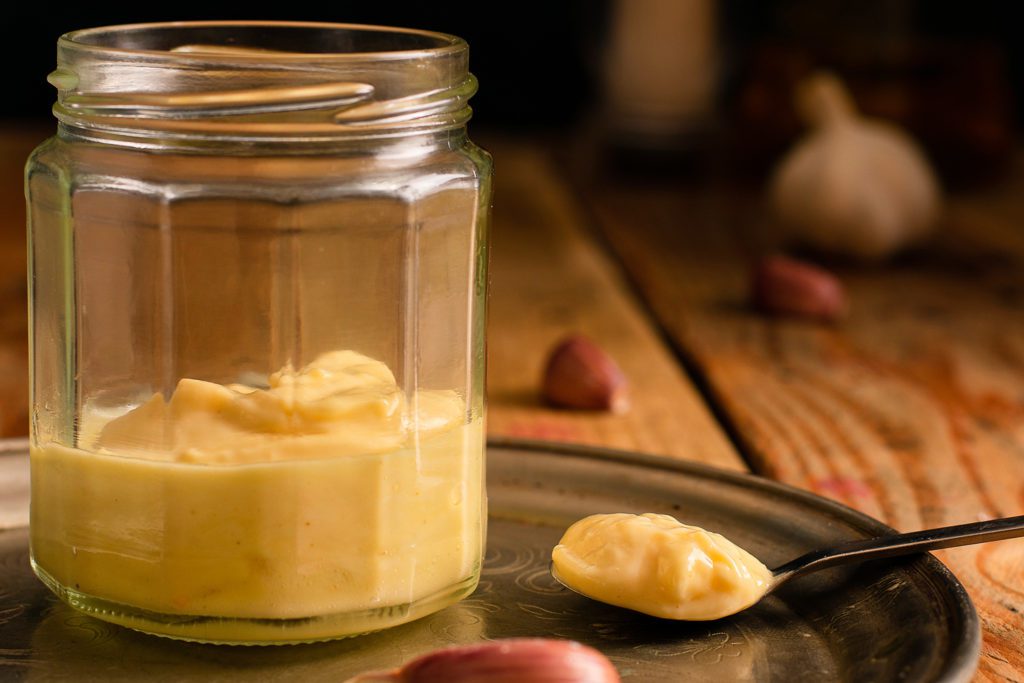 How to make Aioli – garlic sauce:

Check out the detailed explanation about how to make homemade mayonnaise. 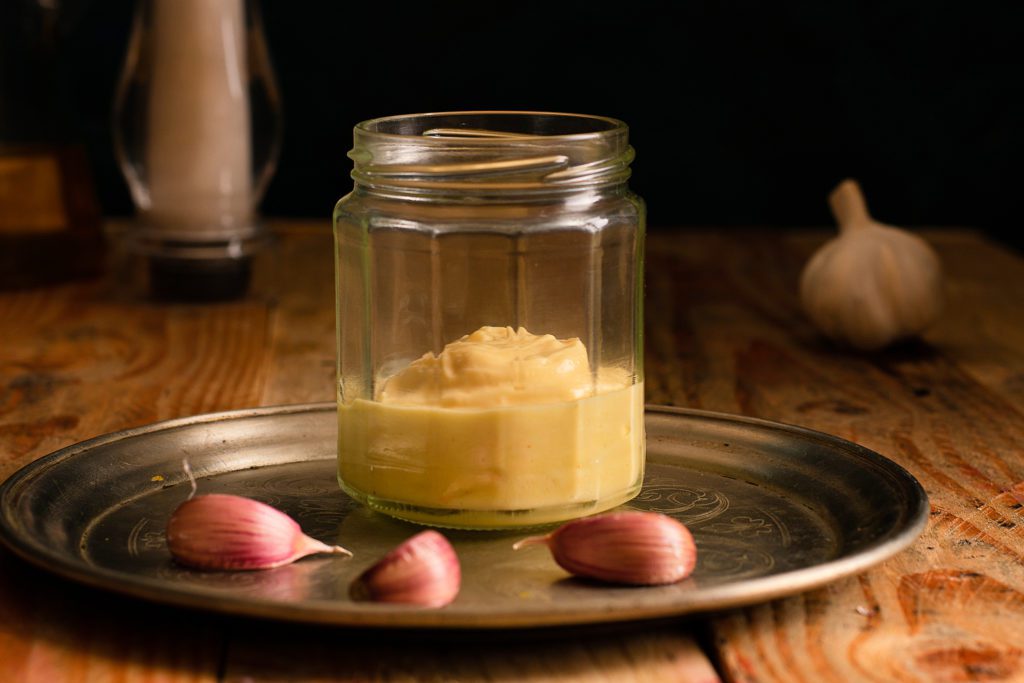 Making condiments low carb, gluten free or sugar free is not only easy but comes completely naturally for them. 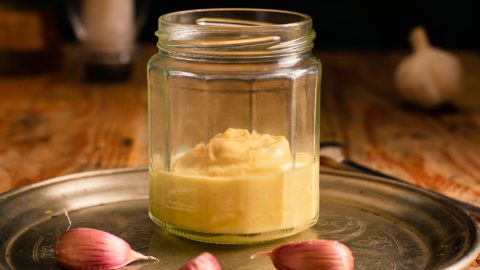 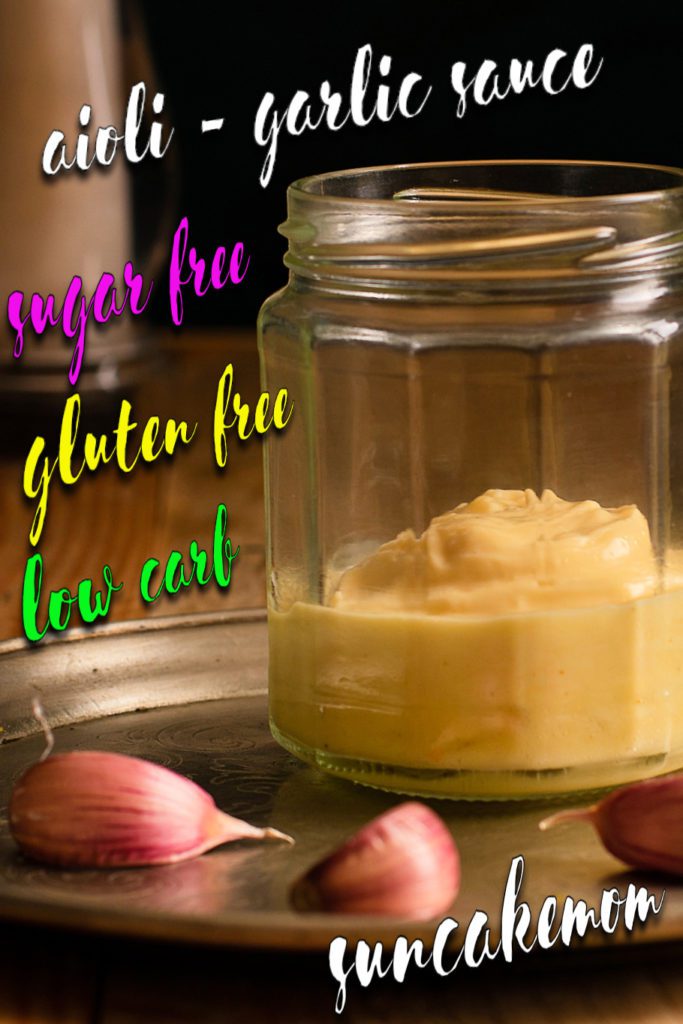